The study of music and songs about fish and marine life. . . a wonderful collection of songs and stories about the fish, the whales, the dolphins, the crabs, and all the other creatures that depend on water for their life. 'Ichthyomusicology' is a result of MAGPIE's many years of playing music for audiences of all ages in and around the Chesapeake Bay region, including performances at the National Aquarium in Baltimore, and arises from their intense interest in environmental concerns such as the cleaning up of our water, air, and land. Terry Leonino and Greg Artzner juxtapose fun and music with a serious look at ecology. With emphasis on audience participation, sing-alongs will tell the stories of the creatures who live in the water and, at the same time, point up our responsibility as "determiners" on this planet to make sure that that life goes on. Both timely and entertaining, MAGPIE's "Ichthyomusicology" is an enjoyable "must" for any age group.

Environmental leaders, political leaders, and people everywhere have proclaimed the 1990's "the Environmental Decade", calling for stepped up action and education on environmental issues to ensure healing of the Earth that we will pass on to our children and grandchildren. In February of 1990, Terry & Greg released their 4th album, "Living Planet", a beautiful and moving collection of songs dealing with the need to nurture and to celebrate Mother Earth and her creatures. In keeping with the theme of their CD, and their commitment to a better world, Terry and Greg offer this program for schools featuring songs about the Earth. The songs in the show celebrate the diversity of life on Earth from whales to wolves, from magpies to macaws, from the teeming oceans to the frozen tundra, from rugged coastlines to the misty rain-forests and tell the sad stories of environmental disasters. But all are sung with the note of hope that with renewed effort and dedication and a renewed honoring of the Earth, we can reverse the negative course we've set in the past and move into the next century as guardians of the Earth's diversity, as advocates of conservation and preservation, and as custodians of a Living Planet.

MAGPIE's program of music from the Civil War era, like their other programs, goes beyond just the story of the war, of the government and the armies, to tell the personal stories of the people of the times and how they dealt with the crisis gripping the nation. The program begins with music from the abolitionist movement and from the Underground Railroad, music borne, as was the war itself, from the malevolent institution of slavery. Many claim that the Civil War was fought not over slavery but over "states' rights"; but the preeminent "states' right" in dispute was undoubtedly slavery. The songs deal with Mary Brown, wife of the famed raider of Harper's Ferry, John Brown, and with the dangerous flight of the fugitive slaves to freedom in the north. They also celebrate the great conductor of the Underground Railroad, Harriet Tubman. From there the program tells the story in song of the soldiers and the loved ones they left behind. The songs are some of the well-known tunes of the day, which described the hardships of army life and of the war itself, as well as the difficulties faced by those "keeping the home fires burning." The songs also express the patriotic fervor that motivated both sides in the conflict. Then the program winds down with songs expressing everyone's weariness with the war, with the exception of one "unreconstructed" rebel, and the hope that these hard times would come again no more in the words of famed songwriter, Stephen Foster. 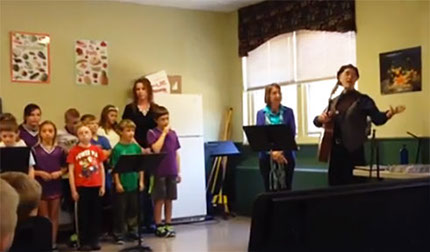 A MIGHTY HARD ROAD: The life and music of Woody Guthrie

Woody Guthrie was one of America's most important songwriters and singers. His work has influenced countless musicians and non-musicians throughout the years, including notables such as Pete Seeger, Bob Dylan, and Bruce Springsteen. He was a true man of the people, and his songs drew from his own life experiences, reflecting the struggles and dreams of ordinary working people everywhere. His music has a lot to say to us in the 1990's and beyond. "A Mighty Hard Road" is a presentation of Woody's songs and the telling of his story, using his own words, in quotations from his many writings: his autobiography, BOUND FOR GLORY, and its sequel, SEEDS OF MAN, as well as excerpts from AMERICAN FOLKSONG, a collection of his songs first published in 1947, and some of his introductions to songs in another collection entitled HARD HITTING SONGS FOR HARD HIT PEOPLE, 1967. Magpie's performance of the songs and rendering of the prose brings to life those times and events, the Dust Bowl days of the 1930's, the migrant farm camps of California during the Great Depression, and Woody's many travels " from the redwood forests to the gulf stream waters." Students are encouraged to join in on the choruses, and in subsequent discussion workshops they are encouraged to exchange ideas about the themes expressed in the songs and their relevance to our times, as well as having an opportunity to ask questions and to learn more about Woody's life.

From the coal mining hollows of Appalachia to the music shops of Tin Pan Alley, from the Dust Bowl to Wall Street, in "Put That Sun Back in the Sky", Terry and Greg take you on a musical journey through America during the Great Depression. Singing the songs and excerpting speeches, quotes, poetry, and prose of the era, they weave a portrait of our country and its people, telling of their hardships, and of the hope that kept them going. The songs chosen run the spectrum of musical styles, from topical and protest songs to popular tunes in swing, blues, and country music. Songs such as those of Woody Guthrie tell of the hardships of sharecroppers and other farmers of the dust bowl states, while the songs of Aunt Molly Jackson and Florence Reece tell of the struggle of Appalachian coalminers to organize unions to improve their lot in life. Even songs by the popular artists of the day commented on the ills of society, including, for example, Gorney and Harburg's classic "Brother, Can You Spare a Dime?", popularized by none other than Bing Crosby, and "God Bless The Child", written and sung by Billie Holiday. Terry and Greg perform them all with equal skill and intensity. The artistry of their interpretations illustrates well the poignancy with which these songs reflected upon and described these difficult years in our history.

The unforgettable characters of Edgar Lee Masters' poetic masterpiece come alive in this presentation. Using contemporary and traditional American music played beautifully on guitar, harmonica, mandolin, and fretted dulcimer, Terry and Greg weave a magical spell that transports the listener to rural Illinois of the late nineteenth century, to Spoon River. This presentation will familiarize students with some of the most important work of one of America's great poets, and will do it with power and beauty. Moreover it will demonstrate the ways in which music can support and enhance oral presentations of the written word, as well as demonstrating techniques for the oral interpretation of poetry. This performance of SPOON RIVER can be adjusted in length to fit any period of time. It is, however, designed to fit into one fifty minute class period, leaving about ten minutes at the end for questions from students. It can also be adapted as a single day residency wherein the artists spend a period early in the day working with select students, e.g.: American Literature class, followed by one or more performances for other classes later in the day. In this day long workshop, the students assume characters and perform the readings under the artistsÕ direction and Terry and Greg perform the music. Magpie's adaptation of SPOON RIVER utilizes some of the best and best known poems from Master's famous anthology, including "Lucinda Matlock" and "Knowlt Hoheitmer", "Petit, the Poet", "Lucius Atherton", "Barney Hainsfeather", "Fiddler Jones" and "Faith Matheny". Songs from the American musical tradition which create the setting and mood include, "The Water is Wide", "Come All You Fair and Tender Maidens", "Times are Gettin' Hard", "Arkansas Traveller" and Michael Smith's beautiful and haunting song, "Spoon River", which he composed for a production by the theater department of the University of Chicago. This program is an excellent adjunct to a curriculum in American Literature, and is also closely tied to studies in American History of the late nineteenth century, as well as courses in theater and drama.

ALL THE NEWS THAT'S FIT TO SING: topical and political music of the 1960's

The Sixties. Just saying the words conjures up powerful images of recent history: the civil rights movement and the Vietnam War, assassinations, youth rebellion and a new drug culture. This turbulent decade brought so many basic changes to American society and culture that volumes have been written trying to sort it all out. Born by the renewed interest of young people in American musical traditions, and inspired by the compelling political struggles that were unfolding at the time, a new generation of angry young songwriters emerged in the sixties. Their message was clear: it was time for this country to live up to the ideals it was supposed to stand for freedom and justice. This group of songwriters included some who would become famous: Phil Ochs, Tom Paxton, Bob Dylan, Malvina Reynolds, and Buffy Sainte-Marie, to name a few. Their songs stirred the emotions and the imagination by focusing on the need for social and political change as well as bringing popular attention to other struggles that weren't at center stage. Terry and Greg, who began singing and playing music in the early sixties, were influenced by these writers and by the events that inspired the songs. Magpie's performances of these songs are stirring and powerful, and from the point of view of people who have been there. Greg organized his hometown's moratorium demonstration against the war in 1969 and Terry was a student at Kent State University, who witnessed and survived the famous massacre there May 4, 1970. Together Terry and Greg have used their music as a vehicle to support those who continue to struggle for justice and freedom. The title of this program "All the News That's Fit to Sing" is used with permission of the Phil Ochs Estate. It's the title of Phil"s first solo album on Electra Records, released in 1964. Phil in making the title, parodied the famous slogan of the New York Times, "All the News That's Fit to Print."

WORKING MY LIFE AWAY

This program introduces students to songs which depict the struggles of working people, following chronologically the history of America's labor union movement. Through the music of some of the labor movement's most famous figures Joe Hill, Ralph Chaplin, Woody Guthrie the stories of miners, migrant farmworkers, textile mill-workers, and many others are told. Poor working conditions, low wages, strikes and picket lines all take shape through song and narration. The program is especially well suited for studies in American social, political, and economic history, as well as language arts and music.

This program is a school program, although not available to every school.  It is however an example of MAGPIE"S songwriting residency work.  We welcome Inquiries.

We are available also to work with whomever to design programs that fit whatever they want to teach through music. 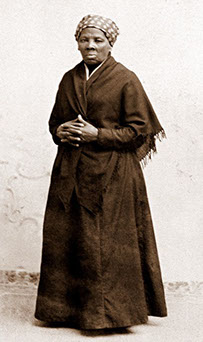 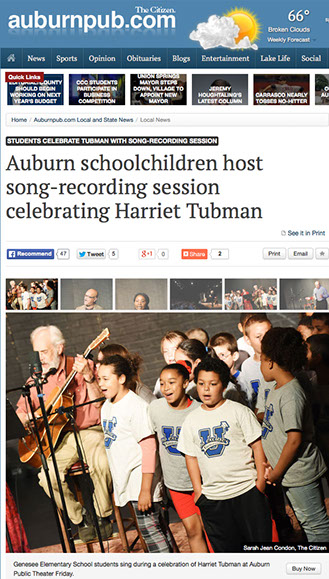